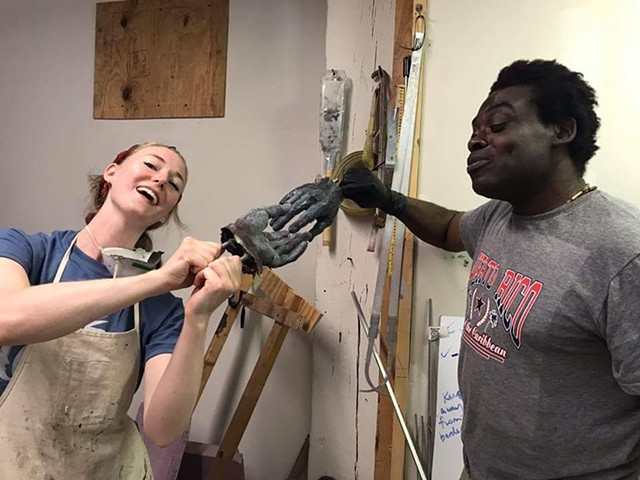 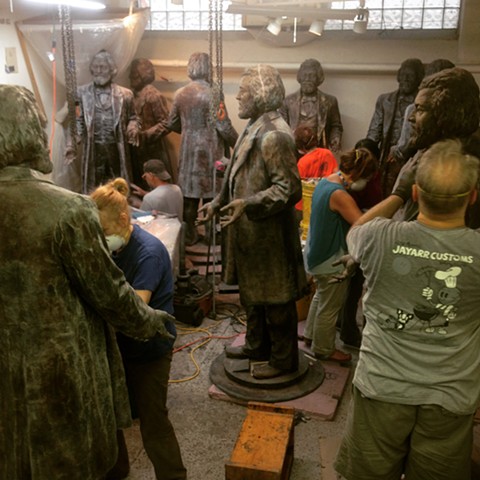 In 2018, Olivia was commissioned by the not-for-profit Rochester Community Television Center to make 13 Frederick Douglass sculptures for Rochester, NY as part of a county-wide celebration of the bicentennial anniversary of his birthday. They are inspired by the 1899 Stanley Edwards' bronze of Douglass and integrate the hands and face of Douglass' living descendant Ken Morris Jr., co-founder of the not-for-profit Frederick Douglass Family Initiatives. The combination of the two represent Douglass' living legacy, of ending slavery/human trafficking on Earth. The statues are placed at historic locations marking Douglass' life in Rochester, culminating in a self-guided walking tour- www.douglasstour.com

Over 200 community and international volunteers came to make the project in record time. The project has helped to bring about many positive additions to the community, including but not limited to: -the moving of the original 1899 Stanley Edwards version of Douglass (the first monument dedicated to an African-American in America) to a more visually accessible location at Highland Park -addition of restorative justice to the local justice system -renaming of the airport to Frederick Douglass Greater Rochester International Airport - a statue was commissioned to be part of a new dance called "The North Star", choreographed by the world renowned Tony and Bessie Award winning dance choreographer Garth Fagan, which premiered at the Joyce Theater in NYC in 2018.

In 2021, the project received county, state and federal grants (National Endowment for the Humanities and National Endowment for the Arts Chairman's Extraordinary Action Award) to make a new bronze Frederick Douglass for the newly named Frederick Douglass Greater Rochester International Airport. The inauguration of the sculpture was on October 28, 2022 and included a celebration of the arts in dance, vocal and instrumental music.